Editor’s Note:  Here, verbatim, is the tribute speech that Glynn made at the AGM, to honour Colin’s sterling work as club chairman and numerous other contributions to EMRIG over the past years. 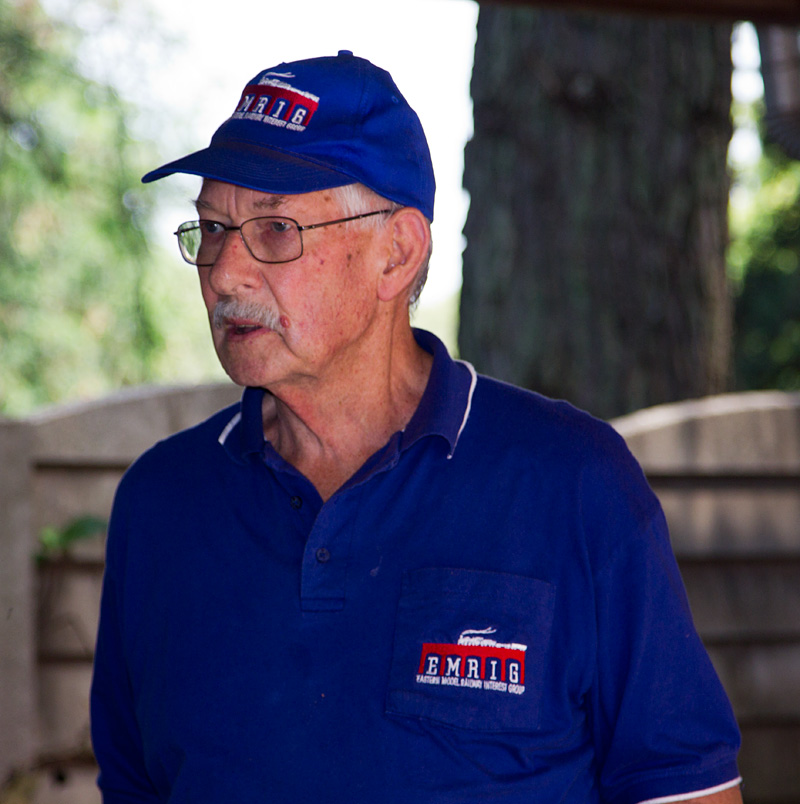 Afternoon folks, I hope you are all well.  I will hopefully not take much of your time before the festivities start…

I was told by Dave Walker that on the 25th September this year, EMRIG turned 33 years old. Now by that standard, I can tell you that I and many other members here are but siblings to this wonderful club. So hopefully the elders will excuse me doing this speech.

I cannot speak about the club before 5’ish years ago when joining, apart from seeing it in the Kya Sands warehouse, the Northview High school and after that the John Barrable Hall, but I have certainly seen it grow from strength to strength since joining, and although many have contributed, appreciation must certainly go to one man in particular, Colin Tanner-Tremaine.

I first joined the club when it was in the Checkers Centre in Benoni town, and first came upon Colin. After a couple of session with him I thought:  “eish – this guy reminds me of my worst headmaster in school.”  If the first AGM I attended was anything to go by, sparks flew. I will not go into detail, suffice to say I kept my mouth shut and continually reversed my chair out of the lager.  And guess what, there were arguably about 8 or 10 of us. Look at us today!  Suffice to say, volunteers were few and far between then.

I would at the time probably have said, “to hell with it, I am out of here”, however, Colin stayed with it.  I asked myself if he was a sucker for punishment.  I have since come to the realisation that it was rather a passion for a hobby he loved and enjoyed.  Who else would continue under such circumstances, especially when you have your own layout at home?

There is a saying, never judge a book by its cover.  Well over the years, I have seen the real Colin.  I have seen a person I am sure we all aspire to be – someone with Perseverance and Vision, and someone who is actually a teddy bear under it all.

If EMRIG were a business and we had time cards, Colin would have raked up the most hours.  In this case, with no payslip, just pure love.  But, we also hope, with a great sense of achievement and gratification.

Colin got EMRIG off to a great start by tirelessly ensuring we have arguably the best club house in South Africa. I can attest to the work he has put in behind the scenes with the various centre managers to secure our shops.  Then he put his name in the firing line when signing the lease.  Who else would have done that?

Swap meets under Colin’s tenure have gone from strength to strength.  Yes, we have an awesome venue and the like, but Colin had the vision and the tenacity to organise and see every meet through.  He contacted sellers, organised tables, set up floor plans…., the list is endless.  All we as members did, was print out the floor plan and set the venue up.

Colin is forever at the club, not for himself, but for the club and us.  How many times have you seen him walk in, not just with his trains, but with his toolbox?  No sooner is he there, than he will be repairing something on the club layout.  He then gets briefed by persons there of other issues, and he is off repairing those too.  Not only does he sort the layout out, but helps fellow members with anything they ask, giving advice, helping them program their locos.  Again, the list is endless…

What about the layout visits, the clinics?  Who arguably did most, if not all the work behind the scenes? Colin!

Then let’s not go into club politics.  But who in their right mind would subject themselves to such torture? What I can say is, compared to other clubs I am with or have been with, EMRIG comes out shining.  There is a kind of camaraderie in this club which is hard to describe.

Colin says it like it is, and it works.  Know that if you get a drilling from Colin, you probably deserved it!

I could go on and on for hours, but shall not.

All that is left to say, Colin, is thank you for your 8 years as Chairman. Thank you very, very much for everything you have done for not only this club, but also its members.

Hopefully the new committee will continue your exemplary work and take EMRIG to even greater levels. Thank you for being the friend you are to all of us, and we hope to continue seeing you at the Club, running trains only, and without all the stresses.

As a token of our appreciation, we have had a little something made up for you. We hope you will treasure it, and just know that you have most certainly earned it.

Please receive this appreciation award from all your friends in EMRIG, and God bless. 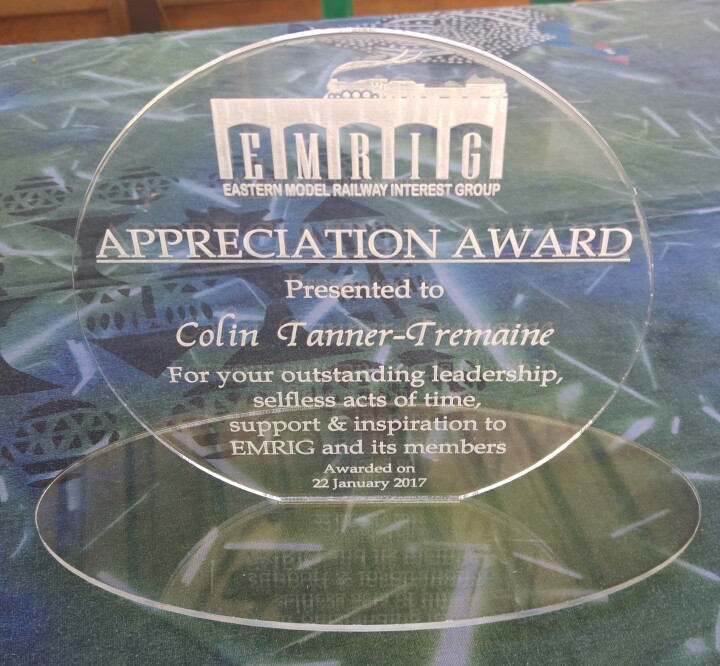